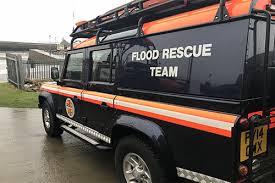 The Team was Paged today (15/09/19) by Coastguard Operations Center Belfast to the report of a person in the water on the River Derwent in Workington.

The Team deployed both Land Rover’s along with members of our Swift Water Technician team, the flood boat and inflatable aids.

Upon arrival on scene and alongside Colleagues from Maryport Coastguard Rescue Team, the team prepared to carryout a water and bank based search. News soon arrived that the casualty had been identified and located with support from the first informant.

Upon hearing such grateful news, the team met with members of Maryport Coastguard and techniques were discussed along side friends and colleagues from Whitehaven Coastguard Rescue Team, Members of Cumbria Fire & Rescue and Workington Lifeboat (RNLI) to achieve the best and safest method of bringing the casualty to the bank side from where they were located.

The man had been walking his dog when he found his companion had entered the water. Being a mans best friend, the dogs owner went to help their 4 legged friend from being swept away by the running water, before finding themselves in difficulty. Quick thinking from the first informant helped get the rescue underway and concluded in a short time.

The tasking was a outstanding example of multiagency work, where teams from shore based organisations came together with those affiliated with water rescue to achieve a positive outcome. Thanks must be given to all involved for such team work skills, techniques and information sharing.

News, Uncategorized
WE ARE RECRUITING
Maryport Rescue receive £77,000 in grant funding from Department Of Transport

Donate to Maryport Rescue using the button below.

Copyright 2022 © Tides Today. By using this data, you are agreeing to the Terms and Conditions